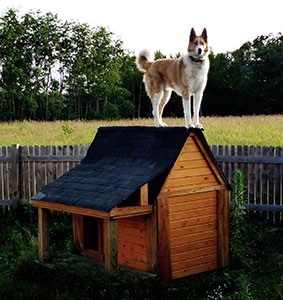 When I, Josh, was in college years ago, I realized I needed a dog in my life. Having grown up with a dog, I missed the companionship and cuddles that a dog can give. I visited the local humane society, where I quickly met Dee-O-Gee. An employee at the shelter said he was given his name by one of his previous owners, a little girl who was so excited to have a dog that she would run throughout the house spelling dog… D-O-G. Unfortunately, Dee-O-Gee was a very energetic puppy and the girl’s parents feared he would grow too large and play too rough. He was surrendered to the shelter when he was about 6 months old.

When I visited the shelter, I saw Dee-O-Gee and fell in love. However, at the time I lived in a small apartment and was in classes most of the day, so I decided Dee-O-Gee had too much energy and was not the right dog for me.

The girl who lived in the apartment above me was a vet tech. The morning after I visited Dee-O-Gee, I received a phone call from the vet tech. She knew that I had been looking for a dog and said she currently had a dog from the shelter on the surgery table. Overnight, another dog at the shelter managed to get out of its kennel and into Dee-O-Gee’s. The two dogs fought and Dee-O-Gee was badly hurt and left with many puncture wounds and a broken leg. 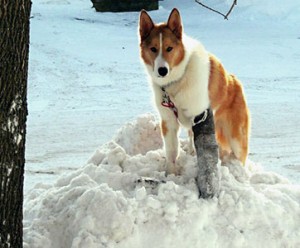 I immediately went to the vet’s office to see the injured dog,  not knowing it was Dee-O-Gee, the dog I almost took home the day before. When I arrived, the vet tech brought me into the surgery room to visit the dog. That’s when I saw who it was and realized I could have prevented this horrible accident by adopting him the day before. When asked if I could foster Dee-O-Gee as he healed, I of course said yes. Dee-O-Gee and I were inseparable after just a few short days, and I knew I wasn’t fostering Dee-O-Gee, I was adopting him. It was a long recovery, but it grew a one-of-a-kind relationship between us.

Dee-O-Gee even helped me find Jessica, the love of my life. Jessica and I met and she was so impressed by my close relationship with Dee-O-Gee that she never looked back.

Dee-O-Gee sadly passed away a few years ago, but he gave Jessica and I some of the happiest years of our lives. Though our family has grown with new furry companions, Dee-O-Gee will never be forgotten. With the name of this business, we honor his memory and all of the happy times he helped to create.

Outside business hours please contact us by text messaging

We are located just outside of Iola, WI. Our home sits on just over 5 acres with over 1 acre that is securely fenced. Make an appointment to visit our quiet home in the country. See for yourself why dogs love coming to stay!